Each householder was required to complete a census schedule giving the address of the household, the names, ages, sex, occupations and places of birth of each individual residing in his or her accommodation. In 1851, householders were asked to give more precise details of the places of birth of each resident, to state their relationship to him or her, marital status and the nature of any disabilities from which they may have suffered. In 1891, householders were asked how many rooms (if less then five) their family occupied and additional occupational data was collected.

The enumerator then collected the census schedules and these were copied into census enumerators' books. The way these are grouped may mean that a road is split over several folios with other streets in between. In this case the street indexes should list a series of folio references.

Although the original census schedules were destroyed many years ago, the books were kept and eventually moved to the PRO archive. The books were then filmed in 1970 to prevent the increasing usage from destroying these fragile records. You may find the odd torn or mutilated page but in general the records have survived in remarkable condition considering the heavy usage they have had.

Details the census can provide

The Census is arranged by Registration District and Sub-Districts with Street Indexes for areas of high population. 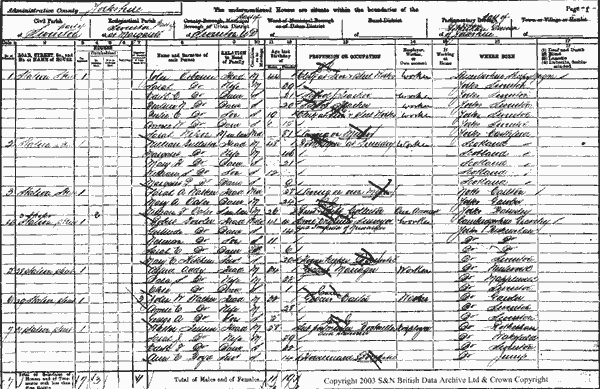 (Contains about 50 pages). This refers to a group of streets and has a special sheet listing which streets are in the following pages.

(Reference to two pages). The original book pages were stamped with a folio number on every other page in the top right-hand corner.